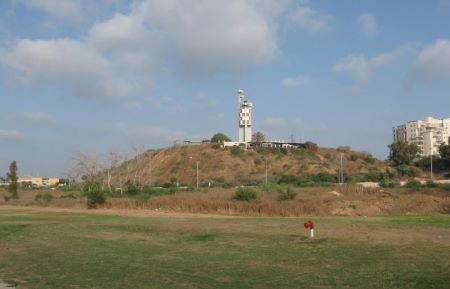 One of the many benefits of using a tour guide in Israel is that you will visit places that many people have never even heard of! One of those super off-the-beaten-track sites, where I have taken many of my tourists, is Givat Yonah (Jonas Hill) in Ashdod. This site is considered by many (but not all) to be the burial place of one of the most interesting prophets in history. It also strategically overlooks one of Israel’s most important places in terms of national security and economy, the Port of Ashdod!

Jonas Hill, which rises 53 meters (174 feet) above sea level (and is the highest point in this flat coastal city) offers a beautiful panoramic view of the city and its surroundings. The hill is also a beautiful park, filled with trees, benches, historical monuments and sculptures. This beautiful, serene area is perfect for a picnic or just to get away from it all and relax away from the hustle and bustle of the surrounding city.

In biblical times, the hill was controlled by the Philistine ruler of the nearby ancient city of Ashdod (see Joshua 13:3 and 15:47). Eventually, the Jews succeeded in expelling the Philistines during the First Temple period, and they built a fortress here (which continued to be inhabited in Jonah’s day). This fortress has thick walls that may have been built by King Uzziah, who drove the Philistines from Ashdod, or one of his successors (see 2 Chronicles 26:6). The logistical advantages of having a panoramic view of the sea and the entire surrounding region made it an important place to protect.

The fortress was destroyed by the Babylonians, although it continued to be used in Hellenistic, Roman and Byzantine times, and even into the early Muslim period. Part of the appeal of this site was that it was considered the burial place of the prophet and became a holy place where people came to pray. Some, however, believe that Jonah’s burial place was in northern Iraq (this site was unfortunately destroyed by ISIS in 2014). In fact, on the famous Byzantine (circa 5th century) map of Madaba (the oldest contemporary map of the Holy Land ever found), this site was identified in Greek as “Saint Jonah”.

During the period of the British Mandate, this hill was used as an observation point to prevent ships bringing Jewish refugees from entering Israel (in 1939, after the Arabs had revolted for three years, the British published the infamous white papers, which made almost all Jewish immigration illegal. ).

By the 1950s, most of modern Ashdod was just sand dunes. In 1954, then-Prime Minister David Ben-Gurion tasked Oved Ben Ami (an early Zionist leader who, among other accomplishments, founded Netanya and was responsible for bringing the diamond industry to Israel) to find a good place to build a large water port. Although Haifa and Eilat had deep water ports, they were not large enough for the growing volume of imports and exports. Rather than enlarge them, they decided to build a new port on the south coast in order to develop the southern part of the country (rather than keeping everything concentrated in the center like Tel Aviv). Additionally, Israel’s main exports in the 1950s were Jaffa oranges grown in Rehovot, potash from Mount Sodom, and Dead Sea products like magnesium and bromine. The port of Haifa was considered too far away for this to be feasible in the long term, so something closer was needed. Ben Ami drove along the coast and saw Jonah Hill. Standing at the top, he saw the desolate sand dunes below and decided this would be the best place to build. In the mid-1950s, construction of the port (and a major nearby power plant that would power homes across much of Israel) was approved. Around these projects, Ashdod was founded as a planned city from the beginning (as opposed to a city that grew organically from a pre-existing town or village). The first district of Ashdod was built at the foot of the hill and was aptly called Givat Yonah (the hill of Jonah). In 1956, the first 22 families settled there (today Ashdod is the fifth largest city in Israel). In 1965, the port of Ashdod was completed, and today 60% of all goods entering Israel enter through here (in addition to the tens of thousands of tourists who enter from international cruise ships).

Besides Jonah Hill, there is plenty to do in Ashdod. On your next trip to Israel, if you’re looking for something a little different, this special hill and town won’t disappoint!