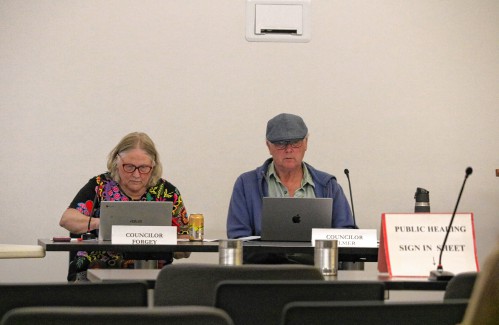 GREENFIELD – After a discussion on how best to move forward and taking into account residents’ concerns, City Council has agreed to postpone a joint meeting between the Planning Board and the Economic Development Committee so that he may consider a zoning amendment that aims to reduce the size limit on outdoor marijuana grow sites.

The amendment proposes to reduce the outdoor grow site limit to Level 1, or 5,000 square feet, from its current limit of 100,000 square feet; limit to three the number of permits of the same type that a person may hold for a parcel; and limit the maximum outdoor canopy under all licenses for a single parcel to 15,000 square feet.

“It seems to me that … we need to scale down this proposed marijuana farm,” Precinct 7 Councilor Jasper Lapienski said, referring to a proposed outdoor grow facility at 446 Country Club Road. “And there is a proposal on the table to do so.”

At-Large Councilor Philip Elmer told councilors that despite planning board approval not required (ANR) last month for 446 Country Club Road, the council is “fully within its rights to make zoning changes, such as the number of square feet of awning allowed, which would ultimately apply to the Country Club Road property.

“You can’t stop the use of this (property), but we can set reasonable limits on what is done on this property,” Elmer said, referring to ANR limits.

The conversation between councilors on Wednesday evening followed multiple remarks from members of the public, urging councilors to reconsider zoning regulations in a bid to remedy the proposed cultivation operation on Country Club Road.

The property has been the subject of controversy following a consensus notification from three LLCs eyeing the site for Level 11 outdoor cultivation licenses from the state Cannabis Control Commission . Level 11 allows grow sites with up to 100,000 square feet of canopy, which is the largest possible size for a grow site in Massachusetts, according to the CCC.

“Growing 300,000 square feet would destroy our quality of life here,” commented resident Al Collins. “The neighbors feel like they’ve been thrown under the bus. … We were not warned that they were doing all this.

Collins urged councilors to press ahead with reinstating a Tier 1 limit before initiating a moratorium that had already been discussed.

“The moratorium will give us plenty of time to deal with other issues,” he said.

Some councilors said last month’s public hearing on a moratorium on outdoor grow sites should be enough to move the process forward, but others were reluctant to hold the city accountable.

“It really takes the planning department’s eye to get it drafted right,” said Mayor Roxann Wedegartner, who spoke out earlier in the meeting in favor of the zoning amendment. “I think citizens would be better served by a fully written zoning bylaw. All of this just opens up another avenue for all the other people who want marijuana grow to sue us, and we don’t need any more lawsuits.

After the joint public hearing, the economic development committee and the planning board will need to make a recommendation to city council, according to city clerk Kathy Scott. At that time, the city council will deliberate and vote on the amendment.

Proposed zoning changes for outdoor marijuana growing were among a handful of topics discussed by city council Wednesday night. In addition to a discussion of police use of social media in the wake of police department budget cuts, councilors unanimously endorsed a resolution that called on the mayor to hire a new licensed site professional ( LSP) for environmental cleanup at the former Lunt Goldsmiths Property on Federal Street.

The property — which Springfield-based 401 Liberty St. LLC subleases to Behavioral Health Network and Clinical and Support Options — has been the subject of controversy among residents and city officials who worry about the state of environmental cleaning. In particular, there are concerns about contamination levels of trichlorethylene (TCE).

“I understand the mayor’s point of view that … some things have to be done in 60 days,” Precinct 3 Councilwoman Virginia “Ginny” DeSorgher said, referring to the notice of non-compliance that the city received following a cleaning audit by the Department of the Environment. Protection. “But there is actually another language service provider who came to some of the meetings (of the public participation plan). It is not difficult to read through the materials. I think we would be safer…with a new LSP.

The City has 60 days from receipt of the Notice of Non-Compliance to submit a Phase II Concept Scope of Work for DEP review. The city must also submit a post-verification statement of completion within these 60 days.

DeSorgher also expressed concern that a conflict of interest would arise, given that the LSP is employed by the future owner of the property.

Although Elmer ultimately voted in favor of the resolution, he spoke on behalf of LSP, O’Reilly, Talbot & Okun Associates (OTO).

“OTO is a reputable organization,” he said. “I believe they haven’t cleaned up the property properly and I hear the conflict of interest issues. I guess it bothers me that an organization that has done a good job is being thrown under the bus.

The resolution calling on the Mayor to hire a new LSP passed, with Precinct 9 Councilor Derek Helie abstaining from the vote.