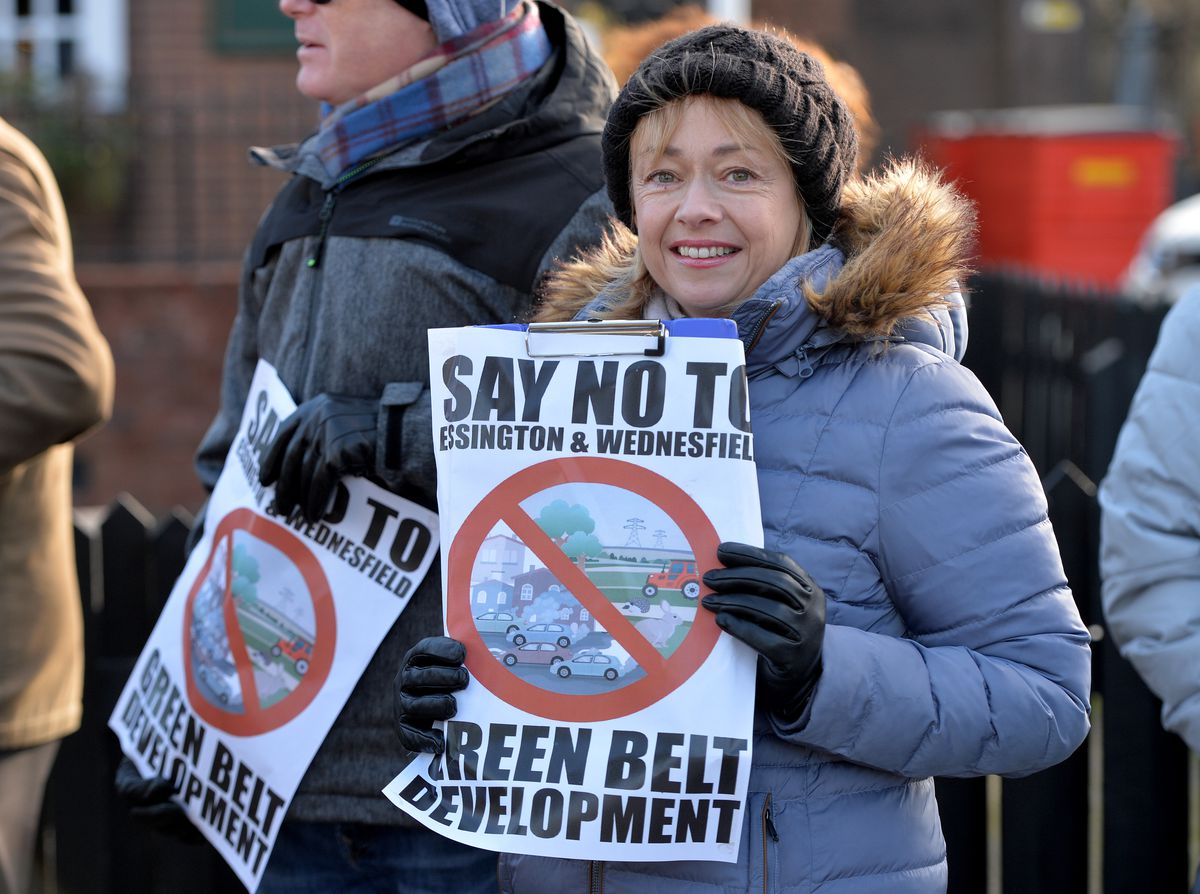 The clock is ticking for green belt venues as protests continue

A year on, the fight continues, with campaigners continuing to bombard the councils with concerns over a number of proposed projects.

They have been given a boost in Dudley after pastures at Wollaston Farm, Stourbridge and land at Guys Lane, Lower Gornal – which are both council owned – were removed from the Black Country Plan (BCP) after being deemed unsuitable Development.

And campaigners are hoping for further progress after council leader Patrick Harley suggested other sites could soon follow suit.

The borough saw protests against two proposals in Kingswinford, namely 533 homes at The Triangle, Swindon Road and 330 homes off Holbeach Lane.

And Mr Harley suggested the two venues could be dropped from the plan due to transport issues.

He said he would be “not at all surprised” if the vast majority of the borough’s green belt sites were not eventually removed from the plan.

Three greenbelt plots in Worcester Lane, Stourbridge are also at risk after being proposed for 115 homes.

A ‘Keep Pedmore Green’ campaign is underway, urging residents to fight the proposals by participating in the upcoming consultation.

Campaigners also say they are concerned about the land on Bromwich Lane, although the site has yet to be earmarked for development in the BCP.

Most of the sites proposed for development in Dudley are classified as brownfields.

They include land in Ketley Quarry, which has been reserved for 612 homes, and Old Wharf Road, Stourbridge, where 230 homes are on offer.

In Walsall, a campaign has been underway since last year to halt a development of nearly 1,000 homes on greenbelt land between Pheasey and Streetly.

Activists have warned that if built, the area will be turned into a vast conurbation.

They say building a new housing estate will wipe out valuable green space, kill wildlife habitat and put incalculable strain on local infrastructure such as schools and health services.

A petition highlighting the damage the development would cause to bird species and the environment has garnered nearly 5,000 signatures.

Nearby, another campaign continues to fight plans to build houses in Calderfields West, next to the Arboretum.

The borough also saw three additional projects totaling more than 800 units added to the BCP at the last minute.

The proposals include land west of Chester Road in Streetly which has been allocated for 655 homes, while land east of Skip Lane and north of Woodfield Close has been earmarked for 135 homes.

A total of 30 houses could be built at the Pacific Nurseries site east of Chester Road, Aldridge, where a separate field to the north has already been proposed for 228 houses.

The sites, which were added to the BCP after missing the original deadline, are expected to be put out for consultation after being approved by the four councils’ governing cabinets.

Councilor Mike Bird, leader of Walsall Council, said his authority had to “bear the bulk” of the developments planned in green belt areas because he had more such land than neighboring boroughs.

Speaking at a Walsall cabinet meeting on Wednesday, Deputy Leader Adrian Andrew urged residents of the affected neighborhoods to take part in the consultation and ensure their views were heard.

He said: “This runs from July to September this year and it is important that everyone makes their views known ahead of the cabinet review in October and the final government consultation between November and December.

“We will listen to what people say and share it, but we are working on goals that have been set by others and those who don’t live in the borough.”

Meanwhile, the Black Country will need to rely heavily on neighboring areas if it is to meet its housing target of 76,076 homes by 2039.

A total of 28,239 – 37% – of the homes planned are to be allocated to land in nearby areas including South Staffordshire, Shropshire and Cannock Chase.

Proposed developments include a major 2,500 house project on land in Kitchen Lane and Linthouse Lane in Wednesdayfield, near the border with neighboring Essington.

The program has received a host of objections, with councilors and the Essington Action Group (EAG) among those voicing their opposition, largely due to concerns about the environment, overdevelopment and infrastructure .

EAG has called for a focus on brownfield regeneration and warned that South Staffordshire risks “over-providing” homes for the Black Country.

South Staffordshire Council has planned 8,821 homes to meet housing needs over the next 17 years, almost half of which are for neighboring local authorities who are “unable to meet their own housing targets”.

The next stage of the BCP will see a consultation run from July to September on the three new Walsall sites.

A consultation on the draft publication plan, dubbed “Regulation 19”, will then take place in the fall, before a finalized version is submitted to the government by May 2023.

The plan is expected to be adopted by May 2024.