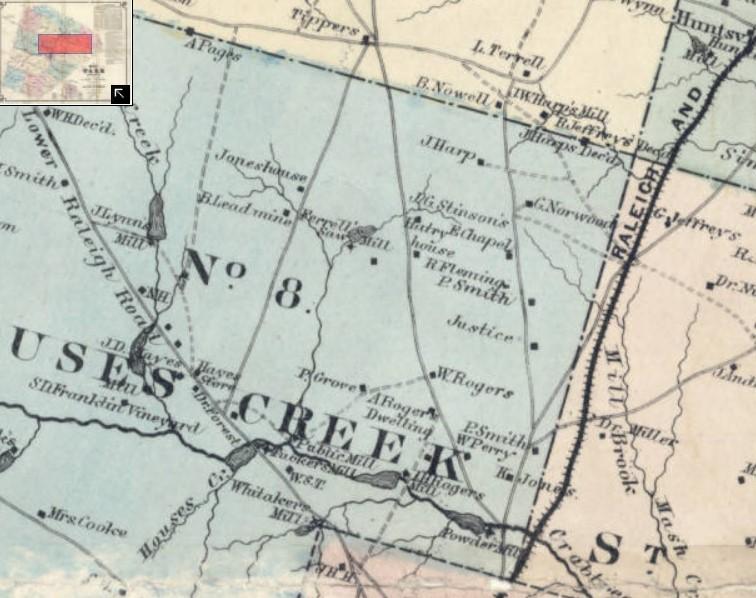 As you pass the bustling and modern North Ridge Country Club – and all the major shopping centers nearby – it can be hard to imagine a time when this bustling area was nothing but farmland, sawmills, hunting grounds and an old brush arbor used as an early church.

Are all of these historic structures long gone or are remnants still hidden, perhaps unknown, in the bushes of someone’s backyard? There may be clues to this lost history hidden in plain sight.

The street names allude to the locations of the old mills

Just down the road, the remains of a 150 year old mill are hidden in the backyard of a suburban home. Historians believe it was probably the original “Mill Brook”, hence the name of the main road nearby.

Likewise, the large North Ridge neighborhood, built in the late 1960s, has clues to its former life hidden in street signs. Names like Grist Mill Road, Harps Mill Road, Mill Stream Court and Rock Dam Court suggest that a mill and its stone dam probably once stood on this land.

North Ridge Garden Club historian Sue Ann Westmeyer has long wondered if these street names might hold clues to the neighborhood’s former life. Then one day, she found the clue that changed everything.

“One day, I found this big crate of miscellaneous stuff,” she says. “Inside I found a 20-page article on the history of North Ridge, written by a former club president, Mary Best.”

Best’s research was compiled into a document titled North Ridge: Sketches of its Past and Present. She had written it to celebrate Raleigh’s 200th anniversary.

“I went crazy reading about it,” Westmeyer said.

The research confirmed that the street names were indeed allusions to the land’s past.

“Land for development [of North Ridge] was purchased from a number of different sources, although much of it was owned by the Harp family.”

The location of the country club today was once the home of Jim Harp. Harps Mill Road marks the home of Sam Harp. 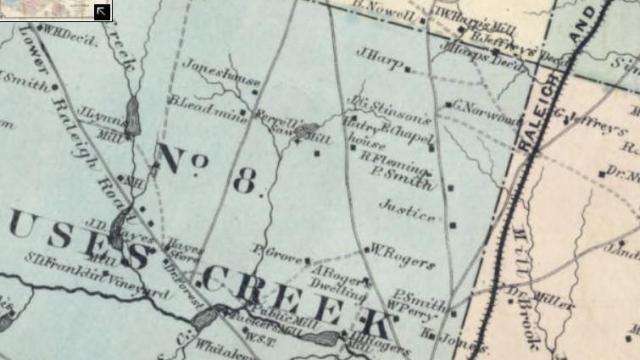 The Fendol Bevers Map of Wake County from 1871 also confirms that a mill once stood on the grounds. A black dot indicates J. Harp’s house – and just a little to the north is the landmark: JW Harp’s Mill.

Just down the road, the map also shows a few other familiar names now used on Raleigh street signs: Whitaker’s Mill, Millbrook, Lead Mine, and Saw Mill. Near the train tracks in Millbrook Village is land marked as belonging to the Norwood family – land which to this day is a haven of history, an old farmhouse untouched by development.

According to Westmeyer, when developers began work on North Ridge, they excavated and found the remains of a rock dam and two mill tracks that once belonged to Harp’s grist mill.

In the mid-1960s, when planning for North Ridge began, the entire area was farmland and woodland, according to Best’s research. Raleigh’s city limits ended several miles to the south.

“There were several small dwellings nearby, but most of the remaining area (including Falls Village and North Ridge Shopping Center) was agricultural fields or forest,” she wrote. There was also a sawmill nearby, and early residents remember seeing packs of wild dogs running around the neighborhood.

Millbrook Baptist Church historians recall when the land now used as a North Ridge Mall was a simple brushwood arbor, where their congregation held meetings in the 1800s before they had a building – difficult to imagine, when you walk into the Starbucks drive-through or Harris Teeter which is in the area today.

According to Best’s research, Bryan Upchurch, one of North Ridge’s original residents – who bought his home for just $5,750 – had remnants of an old carriage road that ran through his property.

“Excavations in the front yard of Bryan Upchurch revealed ruts from a cart path that had led there,” Best wrote.

Westmeyer also found research showing that street names like Hunting Ridge, Buckhead, Staghorn, Foxfire, and Fox Hunt indicated that the land was once used as a hunting ground.

“Hunting Ridge Road is actually on higher ground,” Westmeyer said. “It’s a ridge. My husband, who plays golf, said the wind is worse there than at home because it’s higher.”

Hunting Ridge has been a favored starting point for fox hunts for many years. However, as Raleigh grew – bringing busy roads and increased traffic – it became dangerous for hunting dogs, and the hunts came to an end.

Robert Leah, who lived in North Ridge in the 1970s, actually remembers seeing an old rotting hunting booth high up in a tree.

“It looked like it had been there for decades, and someone forgot it at the very top of the tree. As the tree continued to grow, the stand just kept getting higher. higher,” he said.

Are there any historical remains today?

According to Westmeyer and Best, the developers who cleared the land for North Ridge dug the land in the 1960s. They discovered the remains of the old mill, a family cemetery, and an old carriage road.

However, some mysteries remain. First of all, it’s unclear what they did with the remains. Did they throw them away? Did they leave them there and just bury them? Could remnants still be hidden in the undeveloped “wooded” areas behind people’s backyards? Or buried a few meters underground?

Is it possible that the people of North Ridge found an old stone, a rusty nail or a rotting piece of wood in their backyard – without even realizing it was historic?

If you have a piece of hidden history you would like WRAL’s Hidden Historian to investigate, email him at [email protected]