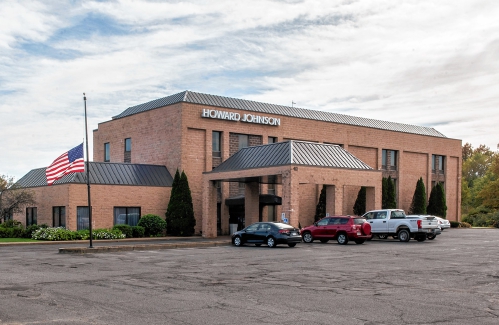 HADLEY — Plans to bring a new office building and 51 affordable apartments to the Route 9 corridor, which would result in the closure of two existing hotels, continue to move toward development.

The Planning Board agreed on Tuesday to schedule a site plan review hearing for Aug. 16 at 6:45 p.m. to review the proposed office building at 401 Russell St. by Amherst Development Associates, whose principal is the chairman of Hampshire Hospitality, J. Curtis Shumway.

This project, a three-story, 40,500 square foot building, would lead to the demolition of the Howard Johnson Hotel.

Artists’ designs show a red brick building, similar in appearance to those at the Atwood Drive development in Northampton, situated along the trunk road, with parking to the rear.

Shumway informed planners of the possibility of redevelopment last fall, noting that the 100-room hotel, which opened in 1966 and was expanded in the early 1990s, is no longer a “class HAS”.

The office building development team will appear before the city’s Conservation Commission on July 12 to address any issues that have possible impacts on the wetlands.

At the EconoLodge hotel at 329 Russell St., also a Hampshire Hospitality, Valley Community Development Corp. property. is looking to convert the 63 rooms into 12 one-bedroom apartments with kitchens and 39 studios with kitchens.

Laura Baker, director of property development at Valley CDC, told the Select Board at a meeting last month that the best-case scenario would be for the property to be converted and let by July 2024.

The next step, Baker said, is to submit a project eligibility letter to the Department of Housing and Community Development and acquire the property in November. Municipal zoning hearings would begin in the winter, with a decision next spring, before state funding kicks in.

The select committee is expected to make a decision this month on whether to offer a letter of support that Baker says could help the agency’s bid.

While two 163-room hotels between them could disappear, city hotels on Route 9 would still include the Courtyard by Marriott, Homewood Suites, Hampton Inn and Comfort Inn & Suites.

Additionally, at 237-239 Russell St., the site of a hotel that was most recently a Rodeway Inn that was closed during the pandemic, the Pioneer Valley Hotel Group may begin construction of a Towneplace by Marriott later this year. This 77-room extended-stay hotel was approved by the Planning Board three years ago.

Kishore Parmar, vice president of the company, told planners that demolition and then construction of the hotel were almost ready to start.

“We hope to start this year, but it could be an extension of another year (we need it),” Parmar said. “If it’s too late, we want to start next spring.”

The Planning Board voted unanimously to extend the project start-up deadline to July 22, 2023.

Scott Merzbach can be contacted at [email protected]