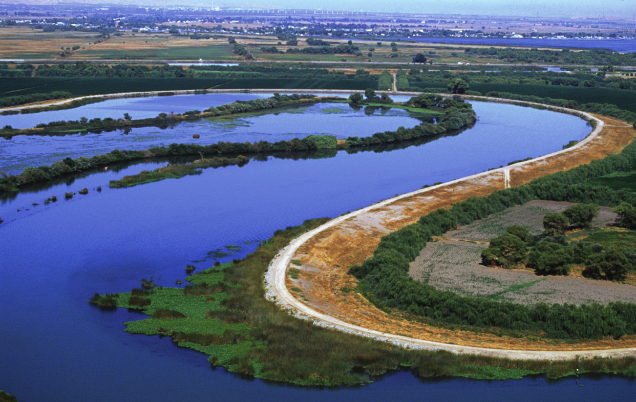 So is the proposed sites reservoir, which is coming under devastating new bombardment from environmentalists following Governor Newsom’s recently announced water supply strategy in which the governor approved the sites project. and even had the temerity to suggest that the environmentalist obstruction stop good projects as well as bad ones.

As reported in the San Francisco Chronicle earlier this week, and dutifully pointed out in Maven’s Notebook, “California’s largest reservoir in nearly 50 years could be derailed by water shortages.” Apparently there is not enough water flowing in the Sacramento River to fill the 1.5 million acre reservoir. But that entirely depends on who you ask.

Below, courtesy of US Dept. of Geological Survey, flow data from the Sacramento River, upstream at Colusa, which is close to where the planned diversions to reservoir sites will be made. The data is expressed in “CFS”, which means cubic feet per second.

What stands out immediately about this graph is how vividly it depicts the volume of excess water that hit northern California, even during what has been described as the driest winter in decades. decades. If during the intermittent wet months of October 1 through April 30, only 20 percent of the Sacramento River’s flow had been diverted to the sites reservoir, nearly 550,000 acres could have been stored, more than a third of its capacity. And since the pumps in one of the sites reservoir’s original designs had a capacity of 5,900 CFS, which equates to 11,700 acre feet per day, during peak runoff events from October through December, at least 100 000 additional acre feet could have been stored.

That is, if one-fifth of the Sacramento River’s flow upstream at Colusa had been diverted, and only during the seven mostly dry months of October 2021 through April 2022, the massive 1.5 million acre site reservoir could have been filled almost halfway to capacity. In a single season, during a drought.

An authoritative 2017 study by the Public Policy Research Institute describes what is known as “uncaptured water,” which is the excess runoff, often causing flooding, that occurs whenever an atmospheric river hits the ‘State. Quoting the study, “The benefits provided by uncaptured water are above and beyond those required by environmental regulations for the waters of systems and ecosystems. The study goes on to claim that uncaptured water flows through California’s Sacramento/San Joaquin Delta “on average 11.3 million acre-feet”. [per year] over the period 1980-2016.

When the average “uncaptured” water flowing through the delta, “beyond that required by system and ecosystem water regulations,” is 11.3 million acre-feet per year , suggesting that there will not be enough water to fill the sites reservoir is an argument based on thin foundations.

Environmentalists cannot have it both ways. Either we are going to have massive atmospheric storms that will require massive systems to capture storm runoff, or we are going to enter a period of chronic droughts where there is not enough water no matter what we do. Even the New York Times, last month, in an article entitled “Why the ‘Big One’ could be anything other than an earthquake”, urged Californians to prepare for a “month-long super storm” of rainfall. What better way to prepare than to build off-stream reservoirs? If anything, Sites is too small.

In the February 2021 “Sites Reservoir Project – Preliminary Project Description” document, the introductory section describes how, in 1995, the CALFED Bay-Delta program “identified 52 potential aboveground storage locations and retained 12 reservoir locations in statewide for further study. All twelve were off-stream reservoirs. They then narrowed the candidates down to four: “Red Bank (Dippingvat and Schoenfield Reservoirs), Newville Reservoir, Colusa Reservoir and Sites Reservoir.” Sites was chosen as the most feasible project. But why is this study not dusted off and revisited? What about those other potential locations for more surface storage?

Governor Newsom, when he presented his California water supply strategy on August 11, also said this: “We did an analysis of these large flows that occurred in November and December of last year. , and if we had the means of transportation and the tools to capture that stormwater, it’s the equivalent of those seven projects I just jotted down that take decades to build in terms of stored capacity…Mother Nature is still abundant, but it’s not working like it did 50 years ago, heck, it’s not working like it did 10 years ago, and we have to reconcile that. We had a vision in the 50s and 60s to do just that, and we want to reinvigorate that capability in California. »

“Reinvigorating that capacity,” Governor, means you’re going to have to start laying off some of the people who make up the commissions and agencies who have been complicit in the environmental onslaught that has halted all major water projects over the past few years. last 50 years.

If you want to be taken seriously in California, according to conventional wisdom, you have to be nice to environmentalists. To survive in good company, to retain professional credibility, one must ignore the sad fact that much of environmentalism today has morphed into a nihilistic, anti-human and extremist movement. But to ensure that California’s dazzling civilization, 40 million strong, will survive and thrive into the next century, perhaps it’s time to stop being so nice to environmentalists. At the very least, start questioning the idea that every scientific argument must invariably tip in favor of its agenda. Scientific assessments of infinitely complex aquatic ecosystems rarely escape scientific debate.

To restore a more humanitarian and progressive balance to California politics, it’s time to tell our state’s all-powerful environmental lobby that it can’t always get what it wants.