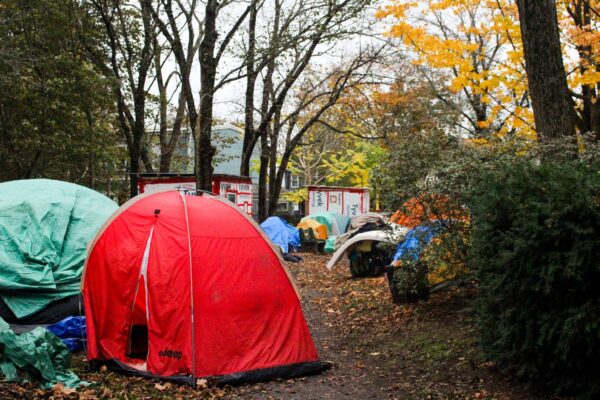 Describing it as the best of a series of bad options, councilors are moving forward with a revised staff proposal to create designated tent sites for homeless Haligonians.

But significant questions remain about how and when people currently living in city parks will be asked to leave, or whether they will be forcibly evicted.

“It’s starting to bring some order, to allow us to better provide human rights-based protections and services to people who are in this critical need that no one should be in.”

As the Halifax Examiner reported on Monday, the staff proposal was for tent sites in 16 city parks – five long-term and 11 overnight – with a maximum of four tents per site. At night sites, people would only be allowed to stay from 8 p.m. to 8 a.m.

This was the main concern councilors had with the plan when they virtual meeting tuesday.

“In my opinion, camping overnight and then having someone – police or regs, whatever – shaking that tent and saying, ‘OK, you have to leave’ at 8 a.m. is problematic,” Coun said. . Tony Mancini.

As of November 2021, tents fill most of Meagher Park, aka People’s Park, where homeless people from HRM have been camping since mid-August. — Photo: Leslie Amminson.

Mason agreed and offered an amendment to remove the overnight idea from the plan and have staff determine which of these parks could house long-term tent sites “to ensure sufficient supplies to meet the request”. This amendment was adopted.

Deputy Mayor Pam Lovelace was concerned about the lack of an enforcement plan in the staff proposal, wondering how the municipality plans to move people from the parks they are currently in to designated parks.

“We do not have the right to exclude someone from a park. We have no right at all to come in and say, ‘I’m sorry, you’re tent number 5, you have to leave. Oh, won’t you go? We will call the police. And there is a conflict,” Lovelace said.

Maggie MacDonald, executive director of parks and recreation, said the municipality would focus on education and “voluntary enforcement” but had no sort of plan to share with council. She said there would be materials made to inform park residents about the rules and available sites.

Mason made a successful amendment to address the enforcement issue, noting that residents have made it clear to councilors that they do not want the police involved in enforcement. The amendment directs staff to return to the board with “a timeline and plan to support transition, education and implementation that is led and executed by civilian HRM staff.”

Lovelace was also concerned about the lack of consultation with those most affected – those who actually live in the parks.

This was one of the main criticisms of staff reporting from those who work with homeless people, such as PADS Community Network, which said staff did not speak with a single person living in a city park.

Max Chauvin, Parks and Recreation’s special projects manager and one of the report’s authors, said he had conversations with “two people who identified that they had the experience of sleeping rough.”

Chauvin suggested that a committee of people with that experience, which was part of the recommendation to the board, could be up and running through United Way next month.

The majority of councilors were in favor of the staff proposal, while acknowledging its shortcomings, but Coun. Trish Purdy was totally opposed to the plan.

“I just want to say how disappointed I am that after all this time, this is the best solution we can find: more camps on municipal parks near schools, trails, it’s very disappointing” , Purdy said.

“It’s not sustainable. It does not work. I have never read an article about a camp site in North America that gives good results.

Purdy introduced an amendment to “convene an advisory committee” to identify “best practice housing solutions for our homeless population.” Lovelace called the amendment “redundant” because HRM essentially did it with the Housing and Homelessness Partnership a few years ago. The motion failed.

Lovelace also had an amendment. She wants Director General Jacques Dubé to negotiate a memorandum of understanding with the provincial government on the response to the housing crisis. After Dubé said work was already underway on the renegotiation of the exchange of services between the municipalities and the province, Lovelace amended his amendment to make it a request for a staff report. This happened.

Here is the full motion board adopted on Tuesday:

1. Direct the Chief Executive Officer (CEO) to continue to support the province and other partners to ensure people have safe, supportive and affordable housing,

2. Direct the OAC to continue its efforts to increase the availability of affordable housing, as described in the body of the staff report dated April 28, 2022,

3. Direct the Director General to formalize the criteria and locations for the designation of overnight accommodation sites in the parks in accordance with the criteria and locations described in the body of the staff report dated April 28, 2022, with the removal of overnight campsites and the addition of these sites to the list of potential long-term campsites, if necessary and possible, to ensure sufficient supplies to meet the demand to be brought back to the board for review.

4. Request the General Manager to continue to review options for adding off-park sites to the inventory of available outdoor sites for overnight shelter,

5. Authorize the Executive Director to negotiate and enter into a contribution agreement with United Way to convene a lived experience committee to advise staff, and

6. Ask the CAO to return to the Board with a subsequent report with additional analysis and recommendations for actionincluding a timeline and plan to support transition, education and implementation that is led and executed by civilian HRM staff.

7. (imprecise wording) A staff report on the directive to the CEO to negotiate a memorandum of understanding with the provincial government “outlining the roles of each level of government and specific actions to support and prevent homelessness and Halifax”.

We have many other subscription options available, or send us a donation. Thank you!