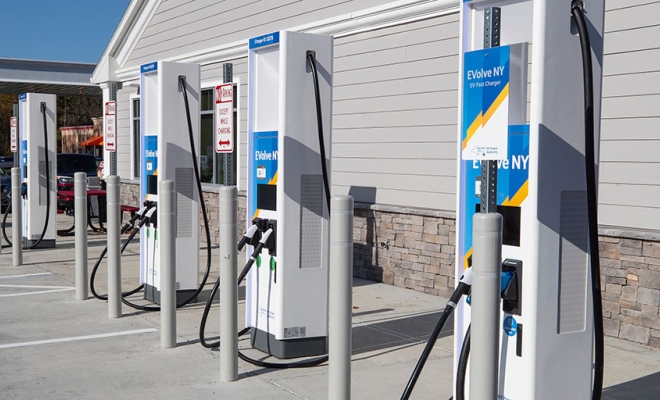 Governor Kathy Hochul today announced that the New York Power Authority will offer free charging to all EVolve NY DC fast chargers across the state from July 1 through July 5 to encourage emission-free electric vehicle driving during the Independence Day holiday weekend. The EVolve NY network hosts nearly 100 charging stations along major travel corridors across the state. The goal of the holiday weekend promotion is to inspire more New Yorkers to embrace electric vehicle driving and drive cleaner. Free fast charging will start at 12:01 a.m. on Friday July 1 and end at 11:59 p.m. on Tuesday July 5.

“My administration remains focused on making continued investments in green power to help reduce greenhouse gas emissions, and this free charging period is a celebration of that commitment,” Governor Hochul said. “By enabling more New Yorkers to charge their electric vehicles and drive cleaner, we can inspire more electric vehicle adoption across the state, ushering in a cleaner, greener future for New York City.”

“These free EV fast-charging stations offered at Evolve NY locations across the state during the holiday week will help reduce the cost of travel for New Yorkers on one of the busiest weekends in the year”, said Lieutenant Governor Antonio Delgado. “We hope these free charging stations will help encourage more New Yorkers and out-state travelers to switch to energy-efficient, zero-emission vehicles and provide a cleaner environment for our children.”

To charge for free this holiday weekend, New Yorkers and travelers can drive up to an EVolve NY fast charger, plug it in, and simply press the start button on the charger’s screen.

Through its EVolve NY program, the New York Power Authority has installed nearly 100 high-speed chargers along New York State’s major travel corridors from Buffalo to Albany and the Adirondacks to Long Island. The program’s goal is to make it easier for New Yorkers to drive in any direction across the state and find fast chargers so they can recharge and get back on the road quickly. Any battery-powered electric vehicle equipped with fast-charging capability can recharge on an EVolve NY fast charger in as little as 20 minutes, including Tesla cars with an adapter. More information about EVolve NY Fast Chargers can be found on the program webpage.

The Progress of Clean Transportation in New York State

New York is making rapid progress toward these goals through a series of initiatives, including EV Make Ready, the EVolve NY fast charging network, the Drive Clean Rebate, the New York Truck Voucher Incentive Program and Charge NY. These efforts contributed to a record increase in the number of electric vehicles sold in New York in 2021, bringing the total number of electric vehicles on the road in May 2022 to approximately 103,000, and the number of charging stations in the state to over 10,000.

The new charging facilities are further supported by the Governor’s “Make Ready” program, which uses funding from investor-owned utilities to achieve a goal of deploying more than 50,000 chargers by 2025. electrification, in conjunction with NYSERDA and the New York State Department of Environmental Conservation and other state and industry partners, will help the state achieve its aggressive clean energy goals , as outlined in the state’s Climate Leadership and Community Protection Act.

Today, New York State hosts more than 970 public fast-charging stations at 228 locations. Their speed varies from 25 kW to 350 kW and their charging times vary. Over 600 are Tesla chargers only.

New York State’s premier climate program is the nation’s most aggressive climate and clean energy initiative, calling for an orderly and just transition to clean energy that creates jobs and continues to drive a healthy economy. green as New York State recovers from the COVID-19 pandemic. Enshrined in law by the Climate Leadership and Community Protection Act, New York is on track to achieve its mandated goal of a zero-emission electricity sector by 2040, including 70% power generation renewable energy by 2030, and achieve economy-wide carbon neutrality. It builds on New York’s unprecedented investments to expand clean energy, including more than $35 billion in 120 large-scale renewable energy and transmission projects across the state, $6.8 billion in dollars to reduce emissions from buildings, $1.8 billion to expand solar power, more than $1 billion for clean transportation initiatives, and more than $1.6 billion in NY Green Bank commitments . Together, these investments support nearly 158,000 jobs in New York’s clean energy sector in 2020, 2,100% growth in the distributed solar sector since 2011, and a commitment to develop 9,000 megawatts of offshore wind power from ‘by 2035. Under the Climate Act, New York will build on that progress and reduce greenhouse gas emissions by 85 percent below 1990 levels by 2050, while ensuring ensuring that at least 35%, with a target of 40%, of the benefits of clean energy investments are directed to disadvantaged communities, and advancing progress towards the state 2025 energy efficiency target of reducing 185 trillion BTUs of on-site energy consumption in end-use energy savings.

About the New York Electricity Authority

The New York Power Authority is the nation’s largest state-owned electric power organization, operating 16 generating facilities and more than 1,400 circuit miles of transmission lines. More than 80% of the electricity produced by NYPA is clean, renewable hydroelectricity. NYPA does not use tax money or state credit. It finances its operations through the sale of bonds and income drawn largely from the sale of electricity. For more information, visit www.nypa.gov and follow us on Twitter @NYPAenergy, Facebook, Instagram, Tumblr and LinkedIn.