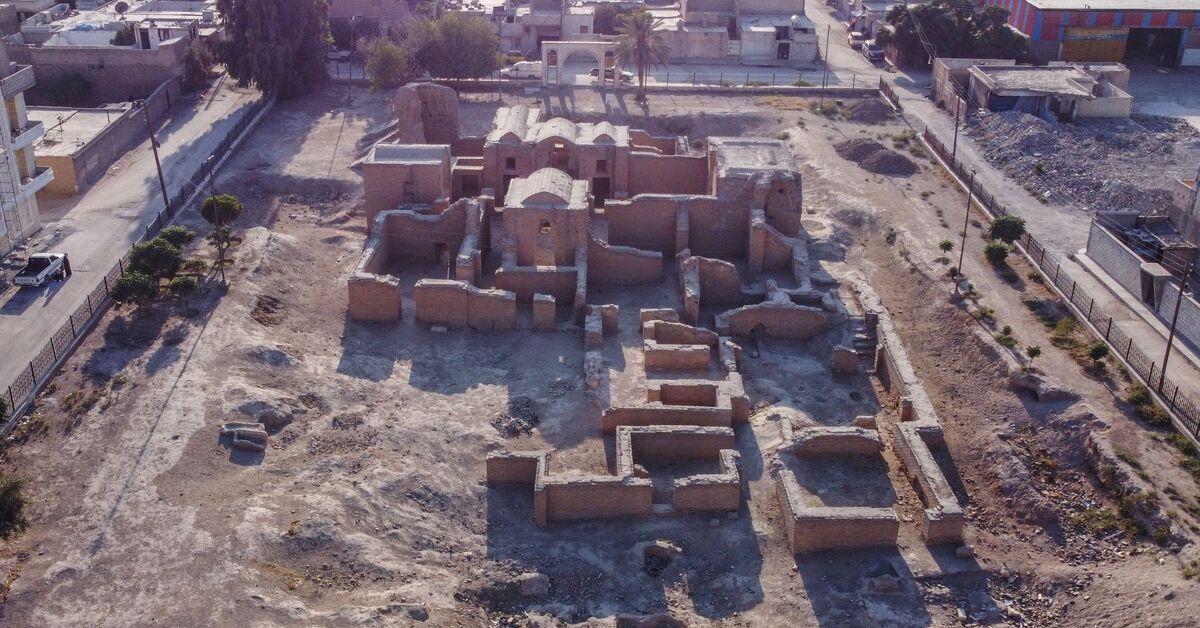 The site, which dates back to the Byzantine civilization in Raqqa province, covers large areas on the eastern shore of the Euphrates Dam lake (also known as Tabqa Dam), from Wadi Sahl al-Khashab and the Shams al-Din region in the northwest Raqqa countryside to the administrative boundary between Raqqa and Aleppo.

Euphrates water levels have reached dangerously low levels during the last years. The flow from Turkey to Syrian territory is less than 200 cubic meters per second, less than half the amount agreed between the two countries in 1987.

Abdul Razzaq al-Aliawi, an engineer and former director of Syria’s Euphrates Maintenance Department, told Al-Monitor: “The bed of the Euphrates has gone through six historical epochs, including Sumerian, Akkadian, the Assyrian, the Greek, the Byzantine, in addition to the Islamic era.” Building dams in the first place, he said, was “an unfair decision.”

The Syrian government of Youssef Zain in 1968 built the Euphrates Dam without diverting the Euphrates into the desert and establishing lakes there. Instead, Aliawi said, “The dam lake was formed with a length of 100 kilometers and a width of 8 kilometers and flooded the most important ancient sites in the river. Only a few artifacts and monuments were saved.

As the water level drops, he said, “many cemeteries are located in this area, which would also include [hundreds] Syriac Christian monasteries. The cemeteries that are still submerged are clearly visible when the sun is shining and the lake water is clear. A few cemeteries have been discovered on the right bank of the lake in the western Raqqa region, he said, but the left bank “is more rocky, which makes it difficult to carry out digging work”.

In July, the receding waters of the Euphrates in Anah’s town in Iraq revealed old town of Talbes. Mohammad Jassim, an Iraqi archaeologist, reported the emergence of at least 80 historical sites due to the lower water level of the Haditha Dam.

On June 6, the Dohuk Antiquities Department in the Kurdistan Region of Iraq announcement the discovery of a city of the Mitanni Empire, dating back 3,400 years, which emerged when the waters of the Tigris basin receded.

The director of the Dohuk Antiquities Department, Becs Privkani, told reporters on June 6 that the city, known historically as Zakhiko, was mentioned in Babylonian texts. It includes a palace and several other buildings, in addition to a large fence, he said, and cuneiform texts have also been found.

Last year, the receding waters of Keban Dam Lake on the Euphrates in the Ağın region of eastern Turkey brought to the surface the historic Hastek Castleaccessible only by boat.

According to the director of the history department of Firat (Euphrates) University in Turkey, Korkmaz San, the castle is a temple dating from the pre-Christian era. He explained in a press release at the time that the castle consisted of three floors carved into the interior of the rocks, with Greek inscriptions on its interior walls.

Saad Fansa, who worked for nearly 30 years at the National Museum in Damascus as the director of photographic archives and documentary archives of Syrian antiquities at the museum, told Al-Monitor: “The decline of the bed of the Euphrates and the discovery of archaeological sites is not new. Similar sites resurfaced in the 1980s when the water level of the dam lake dropped.

He added: “One of the most important sites that was flooded by water from the Euphrates Dam during the creation of Lake Assad was the site of Mureybet, an ancient settlement mound dating back to the Neolithic era. This discovery gave insight into the development of agriculture in the region as well as the deification of women at the time.

Fansa continued, “The Euphrates River flows through Syria and Iraq, the Tigris flows from Turkey to Iraq. Due to global drought, [submerged] archaeological sites will continue to resurface in these countries.