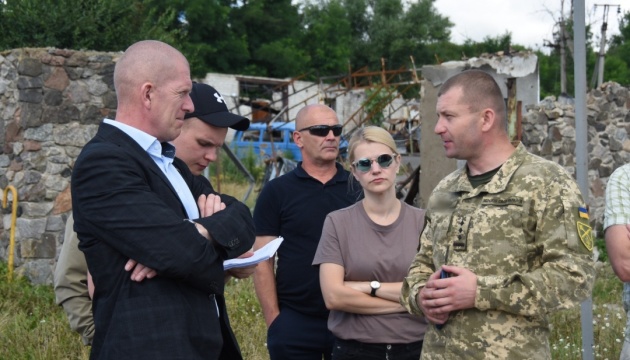 A delegation of the Estonian Defense Forces, led by the Commander, Lt. Gen. Martin Herem, as part of an official visit to Ukraine, visited Russian war crime sites in the regions of Kyiv and Chernihiv.

According to Ukrinform, the General Staff of the Armed Forces of Ukraine said so in a Facebook Publish.

During his meeting with his Estonian colleague, the Commander-in-Chief of the Ukrainian Armed Forces, General Valeriy Zaluzhny, said that Herem’s arrival in Ukraine at this difficult time for the country is proof of support and systemic solidarity in the war against Russia.

“I appreciate Estonia’s involvement and assistance, the effective support of the army, the high level of our military cooperation, as well as the hospitality with which Estonians have accepted refugees from Ukraine,” Zaluzhny said.

During the visit, the Estonian Defense Forces delegation got acquainted with the security situation in Ukraine, the composition and number of Russian groups both in the temporarily occupied territories of Ukraine and in the territory of the Russian Federation along the state border of Ukraine and the territory of neighboring states, the nature of the actions and directions of concentration of the enemy, its losses in personnel and equipment, revealed facts of violation by the enemy of the rules of war and war crimes against humanity.

In addition, the parties discussed the assessment of the likely nature of enemy actions in the future, the security situation on the Ukrainian-Belarusian border, the development trends of the military-strategic situation in Eastern Europe the East and in the Black Sea and Azov region.

The delegation visited the heroic towns of Hostomel, Borodianka and the territory of heavy fighting near Moshchun, Kyiv region.

Furthermore, together with the officers of the Northern Operational Command, the Estonian army visited the sites where Russian forces committed war crimes in the Chernihiv region. In particular, they saw the destroyed stadium, the library, the Bobrovytsia residential area, etc. In addition, foreign colleagues got acquainted with the security situation in the region and how Ukrainian forces are countering Russia’s armed aggression.

The commander of the Estonian Defense Forces stressed that the example of Ukraine’s struggle in the war with Russia is invaluable experience for NATO countries, and Estonia is one of the states that has always supported Ukraine and its army, in particular by helping with the professional training of personnel.

The General Staff of the Armed Forces of Ukraine expressed its gratitude to Estonia for its support and assistance.