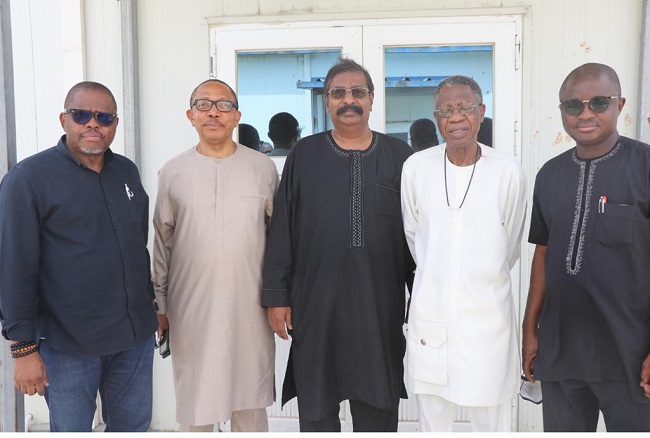 Information and Culture Minister Alhaji Lai Mohammed described the Dangote refinery and petrochemical plant as one of the busiest construction sites in the world.

The minister made the observation over the weekend in Lagos after a tour of the Dangote Fertilizer plant facilities, adjoining the Lekki seaport jetty and Dangote refinery.

According to him, after touring the facilities, one can conveniently say that Dangote is spearheading Nigeria’s industrial revolution.

He said such massive industrial complexes as the Dangote Fertilizer Company and the refinery were made possible thanks to the enabling environment provided by the administration of President Muhammadu Buhari.

He said he was delighted that new businesses are springing up across all sectors in the region, adding that this has been made possible by a conducive business environment in Nigeria.

He further revealed that under the current administration, the Presidential Business Environment Council (PEBEC) has implemented over 150 reforms, pushing Nigeria up 39 places on the World Bank’s Doing Business Index. since 2016.

He added that the President had also signed into law the Companies and Related Matters Act 2020 (CAMA 2020), which he described as Nigeria’s most important commercial legislation for three decades.

His words: “The result of this favorable business environment is the birth of new businesses such as the $2.5 billion Dangote Fertilizer Plant which will produce 3 million metric tons of urea each year; the 650,000 barrel per day oil refinery due to open later this year; Lekki Deep Sea Port, one of the most modern seaports in West Africa; BUA’s 3 million metric ton cement plant; and the 5,000 barrel per day Modular Refinery in Imo State, and three other Modular Refineries to be commissioned before May 2023 in Edo and Bayelsa States, to name a few. .

He added that with the commissioning of the Dangote fertilizer plant, Nigeria has become self-sufficient in the production of urea.

“We were lucky enough to witness the loading of a ship loaded with urea for export to Argentina. From what we have heard here today regarding the 650,000 barrel per day Dangote Refinery, officially known as the Petroleum Refinery and Petrochemical Plant, the refinery would be a game changer when commissioned in terms of job creation.

Leading the Minister and a team of journalists around the recently inaugurated largest granulated urea fertilizer complex in Africa, Mr. Devakumar Edwin, the Executive Director, Strategy Capital Projects and Portfolio Development, Dangote Group, said delighted with the Minister’s visit and revealed that the group had already started exporting urea to Mexico, Argentina and other parts of the world.

Regarding the refinery, he explained that it has a total tanker loading capacity of 2,900 for shipment by road to areas that could not be delivered by marine facilities.

Edwin also revealed that with an average of less than 400,000 liters of petroleum products needed in the country per day, 60% of the refinery’s output would be available for local consumption while the rest would be for export.

He said the year-end deadline for the inauguration and full take-off of the world’s largest refinery with a capacity of 650,000 barrels per day was sacrosanct.

According to him, the dredged landing point in the Atlantic Ocean would allow vessels loading crude oil at the refinery to dock and unload for production.

He added that refined products from the refinery including gasoline, kerosene, diesel and aviation fuel would also be loaded onto vessels at the landing point for distribution to Warri, Port-Harcourt, Calabar and other southern states.

Edwin said it would reduce the outdated and risky method of transporting petroleum products by tankers over long-distance routes.

Specifically, he said sea shipping facilities for refined products from the refinery are 75% while there were facilities available for road shipping as well.

2022-04-06
Previous Post: Telcos want FG to intervene in shutdown of Kogi sites – The Sun Nigeria
Next Post: Fake news sites continue to spread false and misleading stories. Here’s how to spot them