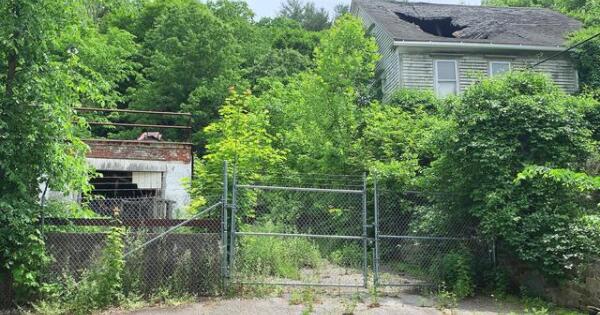 The city is in the final stages of securing an $850,000 bond to demolish buildings and dispose of hazardous materials at two properties in downtown Sandy Hook. Both properties – at 7 Glen Road and 28A Glen Road – are owned by the city, having been seized years ago for back taxes.

The particularly targeted property will be 28A, which has six dilapidated structures and hazardous waste barrels on site. The bonding will be used for the demolition of the buildings as well as the removal from the properties of a number of containers containing hazardous materials.

Deputy Director of Economic and Community Development Christal Preszler said the bee On May 31, two environmental site assessments were completed by the city in conjunction with the Council of Naugatuck Valley Governments.

According to a Phase I environmental site assessment conducted by EnviroAudit in 1992, the site, owned by RS Watkins & Sons, was residential until the Watkins family added industrial buildings and began metalworking operations on the cast iron and steel in the early 1930s.

From 1974 to 1990, RS Watkins & Sons added welding, wire drawing and brass annealing operations. Wire drawing operations required the use of acid baths to remove scale and lubricants during the wire drawing process. The EnviroAudit report documented the presence of acids, caustics, oils and large vats of “green solution”.

The green solution may have been a wire drawing lubricant containing copper sulfate, which is a commonly used lubricant and rust remover.

The EnviroAudit report documented the presence of soil stains inside buildings and acid pitting on concrete floors. They also identified that a “chemical storage tank” was in poor condition. The size and/or the contents of the reservoirs have not been described in more detail.

A 2016 Phase II environmental site assessment by GeoDesign Incorporated revealed that four buildings had containers containing volatile organic compounds, petroleum hydrocarbons, cyanide, metals (arsenic, cadmium, chromium, copper, lead and nickel) ; there are “four or five” 1,000-gallon underground tanks on the property containing petroleum hydrocarbons and volatile organic compounds, which are between 24 and 47 years old at the time of the report; and dry wells, pipes, sump pumps, and septic tanks that also contain volatile compounds and metals.

The initial environmental assessment did not reveal that nearby soil or water was contaminated; however, the 2016 study found chromium, copper, and lead to exceed correction levels at the sump pump, dry well, septic, and slab mud areas. Petroleum residue was found in the floor of a building, next to the basement floor drain, but not exceeding an amount requiring cleanup.

Preszler said that when an investigation is complete, the assessment is “always limited by money” and may not be the “end of all” contaminants on the site.

She noted that cleaning up properties has been part of the city’s capital improvement plan for a number of years.

The $850,000 credit was approved by the Board of Selectmen and the Board of Finance; approval was also awaited by the Legislative Council when it met on 1 June.

Associate Editor Jim Taylor can be reached at [email protected]

The city is investing $850,000 to clean up a site at 28 Glen Road. The city owns the site after it was seized due to back taxes due. —Bee Photo, Taylor