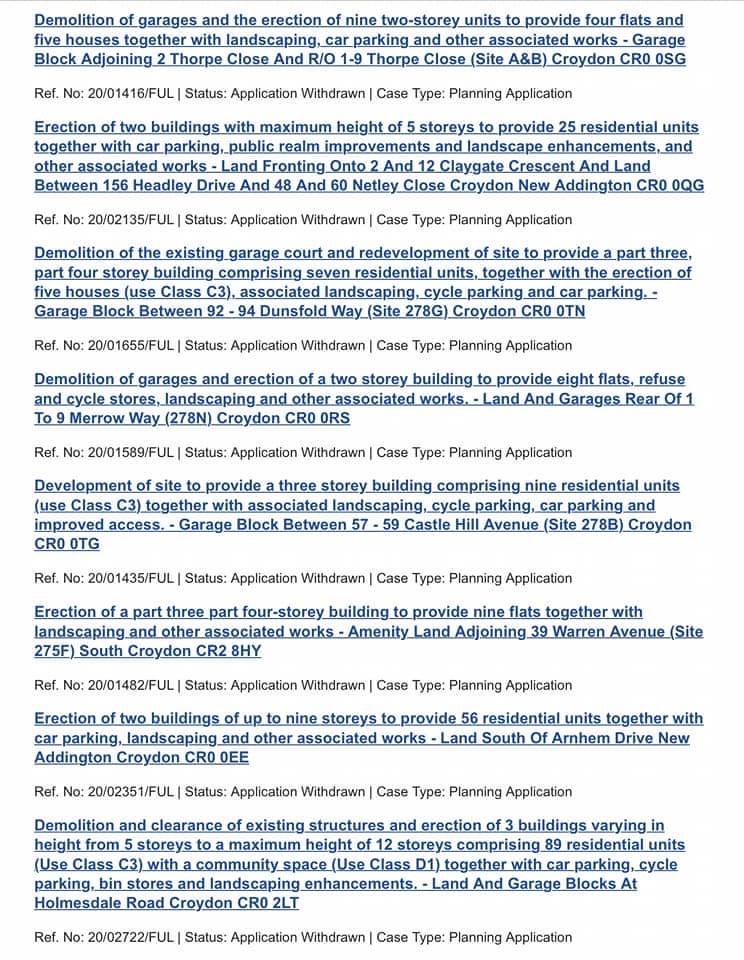 Brick by Brick abandons its planning permission for 23 sites

CROYDON IN CRISIS: Council set fire to a ‘bonfire of vanities’ this week, dropping planning permission on 477 homes around the borough in development proposals from their failing homebuilders.
EXCLUSIVE by STEVEN DOWNES

Faded away: planning permission for this Brick by Brick Stasi-era monstrosity to be inflicted on New Addington has been dropped, one of 23 projects that will not be developed now

Croydon Council has scrapped the last remaining building projects proposed by Brick by Brick, with planning applications withdrawn for 23 sites, the majority of which had all been granted permission two years ago.

Arrogant: Jo Negrini, former CEO of the council, was behind the Brick by Brick idea

A total of 477 housing units across the two dozen sites had their planning applications officially withdrawn this week.

It’s the ultimate vanity bonfire for the likes of Jo Negrini and Colm Lacey, the former council officials who oversaw the homebuilding disaster, and local Labor politicians Alison Butler and Paul Scott, who engineered and bullied the project through, allowing hundreds of millions of pounds of public money to flow brick by brick, mismanaged and unchecked.

Ultimately, it all led to the borough going bankrupt and Labor losing control of the council in last month’s local elections.

Since its inception in 2015, Brick by Brick has received around £200m in loans from Croydon council, but has never made a profit and has never repaid a penny of its loans or interest to the council before the City Hall was forced to publish its notice under Section 114 18 months ago. Following the council’s financial collapse in 2020, Brick by Brick is fading away as a business, with existing projects being completed and what remains of its hard-won assets sold off, mostly at a loss.

Abandoning these last 23 developments will cost Brick by Brick at least £30 million in lost capital, according to a conservative estimate by an experienced property consultant.

Millions of additional public money will also have been wasted by the company when it drew up the plans and hired architects, while the council will have incurred significant costs dealing with applications through its planning department.

The cancellation of these 477 properties – many of which will have been earmarked for private sale – follows Inside Croydon reported earlier this week that more than 200 Brick by Brick homes are unoccupied, despite having been completed months or even years ago.

The withdrawal of planning applications for the 23 other sites was done calmly. Neither the council nor its bankrupt homebuilders, Brick by Brick, have made a public statement about the move, as one by one the projects listed on Croydon’s planning portal have been quietly updated to “Status : request withdrawn”.

Almost without exception, they have all been imposed on communities despite strong opposition from existing residents concerned about over-intensification and other issues including the destruction of open space and the threat to endangered wildlife habitats.

Most of the projects withdrawn this week had been granted planning permission in 2020, amid the covid lockdown and in the final days of Negrini’s time as chief executive of the council – as if there had been a concerted attempt to make put projects ahead of everyone else. pulled the plug as she and Lacey’s little housing ’empire’ crumbled around them.

When Brick by Brick rolled out its latest wave of two dozen programs in early 2020, with what was described at the time as “a desperate emergency,” residents suspected the covid emergency was being used to avoid anything that looked like scrutiny.

In a quasi-consultation, residents of Bramley Hill were told bluntly: ‘We recognize that the development is not always popular with the local population, however, with an ongoing housing crisis and the need of more homes of all tenures in the borough, it is essential.”

Brick by Brick manager Chloe Phelps described the projects at the time as “buildable and financially savvy”.

They all turned out to be deeply unbuilt and extremely expensive.

Phelps and his boss, BxB’s incompetent CEO Lacey, had used public loans to pay top dollar for some of London’s hottest architectural firms to draw up the plans for what they described as “difficult places”.

Abandoned: From Norbury to Purley to Coulsdon, Brick by Brick’s latest installment of development has cast a cloud over Croydon’s communities. This week, 23 schemes were abandoned

Among the sites removed from the planning process this week was Brick by Brick’s plan to build on open space and grass borders near the entrance to Hutchinson’s Bank Nature Reserve in New Addington.

Although the site is adjacent to a Special Site of Scientific Interest and is home to at least three endangered butterfly species, as well as badgers and bats, the planning application submitted by Brick by Brick contained official statements claiming that there was no wildlife habitat on the site. to place. Despite this blatant lie, the council’s planning committee, still under the effective control of Paul Scott, granted permission for the project.

The Hutchinson’s Bank site was one of eight in New Addington that was granted planning permission, but have now all been abandoned.

Other controversial projects which are now abandoned include a block of nine apartments which have been built on ‘amenity space’ – green space – on Covington Way in Norbury,

Abandoned: eight of the BxB projects to be scrapped were in New Addington

And the massive intensification of infill sites in and around Albury Court and Bramley Hill in Waddon, where Brick by Brick wanted to concrete small plots of public green space and squeeze eight new buildings into seven plots between existing housing, was also dropped.

The cessation of this last tranche of Brick by Brick operations only saw the light of day thanks to the relentless and obstinate research work of the members of the local residents’ associations.

The abandonments signal an admission by the current directors of Brick by Brick – who were appointed after the financial collapse of the board to carry out the liquidation of the company – that they cannot find any established developer ready to buy the sites, even with a building permit, to carry out the projects.

Abandoned: The leaders of Brick by Brick were in the grip of flashy architectural firms, all of which will have received generous fees for their work on these unbuilt projects

Today, a resident who has been following the whole unfortunate saga from the beginning tells Inside Croydon“The whole premise of Brick by Brick was based on the conceit and arrogance that Lacey and Negrini shared with Paul Scott and Alison Butler – that these development novices could somehow successfully develop sites of expensive and difficult infill, on council plots – owned land in often hard-to-reach places, sometimes close to existing buildings, sites that expert and professional developers would not touch with a barge pole.

“The reason real developers wouldn’t even look at such sites is because they know enough to realize that there would be little to no build feedback there.

“It was the ‘Emperor’s New Clothes’ brick by brick, and for five years those who called the labor board on the folly of their position were mocked, fired or worse by the board and cronies of Negrini among the architects of London or the booze cronies of the real estate speculators of MIPIM.

“The abandonment of the two dozen plans this week proves that Negrini and Lacey, Scott and Butler were so wrong all along, and their little ego trip will have cost Croydon nearly £100million.”